It was only fitting that on our journey through the land of orange dirt, we should stop at an old copper mine.  The mine has long since closed, but I had heard that this mine, in Ducktown, Tennessee, had one of the largest open copper craters in the area and I wanted to take a look.  Although we arrived after the small museum had closed, we had a nice chat with the woman who ran it.  She told us that on an ordinary day she’d stay open late for us, but she had to get home to see her daughter.  No matter, we were able to see the crater and be on our way.

After a day and a half of exploring Chattanooga, we headed up to our highlight of Eastern Tennessee, the Museum of Appalachia in Clinton.  I’m a sucker for living history museums, and this was one of the best I’ve ever seen.  The curation was as interesting as the contents themselves.  It was pretty clear that this was not the work of a museum committee made up of historians who are at arm’s length from the history they are describing.  Instead, it was a more personal look at a community’s attempt to save, define, and communicate a sense of itself.  We were able to spend several hours there (it helped that there was a lot of outdoor space for Van to run around), but I could have easily spent a full day or so if I wasn’t tethered to a small child. 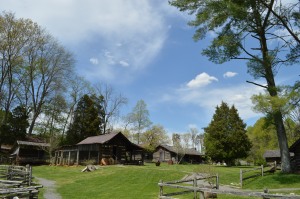 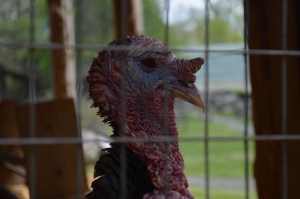 We finished our stay in Eastern Tennessee with a couple of nights in Cumberland Gap National Historic Park.  We technically camped in Virginia, but all three states meet right there, so we considered it more of an extension or our time in Tennessee.  We did some great hiking, but by far the coolest thing for me was walking along the Wilderness Road Trail.  This is the trail that Daniel Boone blazed in 1775, following the footsteps of many Indians and bison before him.  The Wilderness Road was recently restored to its original appearance as it crosses the Gap.  I spent all of our short time on the trail envisioning the many, many people who had crossed this Gap with all of their belongings, heading west not knowing exactly what to expect.  Certainly one could draw some loose parallels to our trip, but those folks had guts well beyond anything that travelers with motorized transportation, a cell phone, and ready access to clean drinking water and food sources could understand.

Alan’s favorite thing in the park was standing in Kentucky, Virginia, and Tennessee at the same time.  I admit that it was cool, and made even cooler by the fact that this point is on a mountain, which is conveniently named Tri-State Peak.  We would have liked to have done even more hiking, but Van was having a particularly tough day (meaning lots of tantrums, crying, and not listening) and the hikes we were most interested in were rather long with a screamy two year old in tow.  Regardless, we were able to see a lot and get a few miles of hiking in before we headed north into Kentucky.

Van and Buddy the Bison, a gift from Uncle Jack and Aunt Jenni for his travels to our National Parks 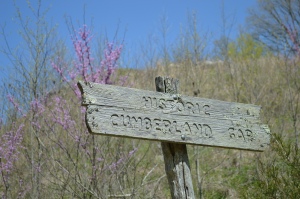 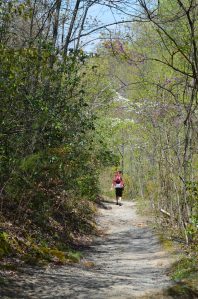 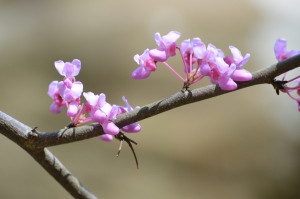 We took a break from dealing with our van headache to check out Memphis today.  It was great to get out in the sunshine and give our legs a stretch after being cooped up in a motel for the past day and a half.  We began our day with a trip downtown to see the Lorraine Motel, where Martin Luther King, Jr. was assassinated.  It was more emotional than I was expecting given that the motel looks just the same as it did when he was killed.  The images of that balcony from that fateful day have been burned into most of our memories, so it was surreal to find it looking just the same.  We were looking forward to seeing the civil rights museum that is associated with the Lorraine Motel, but it is currently under renovation, so we made do with a moving visit to this historic but upsetting location. 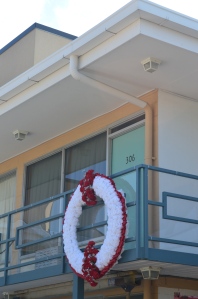 We wandered around downtown, checking out Beale Street, The Peabody Hotel and its fountain-dwelling ducks, and several other areas that looked interesting.  Van had a ball waving to every trolley driver that drove by.  I’m pretty sure every single trolley driver waved back – and so did many of the passengers.  Aside from the fact that Memphis will always be the place our van died, this is a mighty cool city.  Definitely a great place to be stuck for a couple extra days. 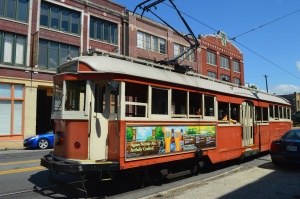 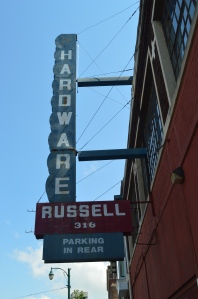 We followed up our walk around town with some amazing barbecue.  The sauce was good but the pork was phenomenal and not much more costly (if any) than a value meal at the nearest food factory.   The banana pudding (of which I’m now a huge fan) wasn’t quite as delish as what we ate in Nashville, but it was a great dessert for only $2.50.  If you find yourself in Memphis (and hopefully it’s under different circumstances than ours), you should definitely mosey on over to Cozy Corner. 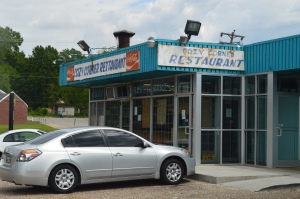 Across the street we saw this – definitely a sign…

Our evening ended in the lobby of our motel with beers and snacky-type dinner food.  The place we’re staying provides breakfast and snack/dinner food with three alcoholic beverages per adult per evening.  You can bet we’ve been getting our fill.  Van makes friends for us quickly down there, so we’ve been able to meet lots of other folks traveling through Memphis.  Tonight we had a long conversation with Grandpa Harrison, a retired dairy farmer from the panhandle of Oklahoma.  We met a few other folks from Oklahoma, all of whom were on their way back from a rainy, cold vacation in Myrtle Beach.  If these folks are a good representation of the residents of Oklahoma, it should be a very friendly state to visit.  I’m just hoping we get there at some point this year.

And that brings me to what you’ve probably all been waiting for, news on our travels.  We were able to get a much better assessment on the van today, enough to tell us that it is not a quick or inexpensive fix.  While we continue to sort things out, we’re going to rent a van to drive us and our things (that van sure could fit a lot of our belongings) to Arkansas for six nights and then drive straight from northwest Arkansas up to Denver in one long day.  We’ll finish sorting things out once we get there and reassess how we’re going to continue traveling at that point.  We will continue traveling – it’s just a matter of how we’re going to do it and what we need to do before we can get back on the road.  Regardless, we’ll have lots of visiting to do in Colorado with family and friends and we’ll take some trips here and there to places we’ve been wanting to check out as we firm up our plans.  While the situation is not ideal (let’s be real – it sucks), I am so glad that the van died when we were crawling out of a parking lot instead of hurtling down the interstate.  And even more important, no one was hurt.  Perhaps the van died to protect us from something even more catastrophic.  We’re learning a lot of important lessons, something we’ll likely write about once we’ve had a little time to reflect.  In the mean time, thanks so much for all of your supportive messages and words over the past couple of days.  It’s meant more to us than you will ever know.

For those of you (mainly parents) who have been following our travels in real time, you know that we’re a bit further along than the blog implies.  I’ve been writing and posting a couple weeks behind – writing in batches and setting them to post every couple of days.  I will get back to the regularly scheduled programming and let you know about our last two weeks in Kentucky and Tennessee, but first I wanted to give you dispatch from the future (or rather, now).

We are, very unfortunately, waylaid in Memphis.  It’s not the city that’s the problem – I’m sure I’ll like it very much once I explore it.  The problem is that on our way into town yesterday our van broke down.  We were very lucky that it broke down in a parking lot as opposed to the side of a busy road, but a broken van is a broken van.  After waiting several hours to have it towed to the local VW dealership and finding a cab to take us to one of the only local rental car companies open on a Sunday (and getting there with less than five minutes to spare), we procured a rental car and a hotel room for a few nights.  The diagnosis of our car came in this morning – we need a new engine.  We’re not sure that’s entirely true, but it’s also likely not all that far off.  Given the cost of a new engine, it is very unlikely that this is something we will be pursuing.

We’ve spent the afternoon assessing our options – in terms of the van, our travels, and the costs involved – and have decided to get a second opinion from someone who has more knowledge of Eurovans.  Alan called around and talked to a guy who seems to have a bit more knowledge than the dealership, so our lovely van will be getting a second tow tomorrow.

We’ll keep you posted on what transpires and what we wind up deciding.  In the mean time, we have our eyes on the horizon and are hoping to still make it to Mountain Home, Arkansas by Thursday to meet my parents who will be spending the next week with us exploring northwest Arkansas.  It’s unlikely we’ll be meeting them in our van, but who knows, stranger things have happened.  And if we have to say our goodbyes to the van, we’ll just have to figure out a new way to travel.  We do still have a second car that is being temporarily stored in Alan’s parents’ garage in Colorado, so we may be downsizing to a smaller (but much nicer) traveling vehicle.  Not sure how we’ll make it work, but we’ll find a way.