Truth be told, White Sands was one of the places I was most looking forward to visiting when we came up with this crazy idea to travel so extensively with a two-year old.  Although we were not able to camp in the monument, our visit did not disappoint.  I was so looking forward to camping on the white sand, but the monument only has limited back country camping.  We were a little puzzled as to why we were not able to camp there.  Once we arrived, it all made much more sense.  I guess the Federal Government prefers that family campers don’t set up camp in the middle of an active missile range.  I knew that the monument was near a missile range, but I did not realize that it was smack dab in the middle of the missile range.  In fact, the monument and the main highway leading to it had been closed earlier in the week when testing activities were being conducted.  My understanding is that this can be a weekly occurrence.

Lucky for us, the only activity we were caught in the middle of was yet another immigration checkpoint, well inside the borders of our country.  We were waved through once we told them we were on our way to White Sands, but we couldn’t help but think of all the folks doing exactly what we were doing who would have to stop and answer many more questions simply because of the color of their skin.

Our first stop at White Sands was the visitor’s center.  Van ran in with his passport in hand, eager to collect yet another stamp.  I picked up his junior ranger’s packet and off we went, ready to explore the park for the day. 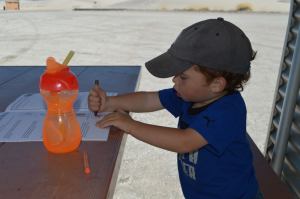 We all had a great time running around the surprisingly cool sand.  Unlike the Great Sand Dunes in Colorado, this sand is made of gypsum and is very cool to the touch.  Bare feet for the win!

The best part of the day was watching Van examine all the crystalline-like sand structures and spotting tracks of various small critters.

Our long and fun day at White Sands was capped off with our very last night of tent camping on the trip.  We drove to nearby Alamogordo and slept at a local campground, but given the low evening temperatures (it had been dipping into the 20s), we decided to finish out our stay in New Mexico at rustic cabins, local motels, and two lovely nights at the home of friends in Albuquerque.  Though it was sad to pack up our tent and realize that it would be staying in the car for the foreseeable future (and has since been replaced), sleeping in the relative warmth of an uninsulated cabin was heaven.

You may think that because my posting hiatus began while I was posting about our time in New Mexico that I was not a huge fan of the state.  That couldn’t be further from the truth.  We loved so many things about New Mexico, chiefly the food, the people, and the gorgeous landscapes.

After leaving Silver City,we took a circuitous route to Las Cruces so that we could check out the interestingly named, Truth or Consequences.  For those not familiar with the history of how the town received its unique moniker, the town of Hot Springs renamed itself in response to a marketing ploy by the game show, Truth or Consequences.  Given its location, I was expecting a sleepy little town.  Instead of just a quick trip through the decidedly awake town, we stayed for the day and took part in the local (and very popular) car show at the local VA home.  My vote went to a sublime cherry red pickup from days long ago (surprise, surprise), while Van was very attracted to the many, many Mustangs.

We eventually pried ourselves away from the festivities and headed south to one of the nicest places we stayed on this trip, a Days Inn in Las Cruces.  As we pulled up to the hotel, Van started pointing and saying “Idaho, Idaho.”  We went back through our memory banks and realized that we had only stayed at one Days Inn on this trip before Las Cruces.  And it was, in fact, in Idaho.  Twin Falls, to be exact.  What a memory this kid has!

We spent one full day in Las Cruces soaking up all the culture we could at the excellent New Mexico Farm & Ranch Heritage Museum.  If you’re ever down in Las Cruces, it’s a must see.  Highlights included a private demonstration of separating milk from cream, watching the process of making a nail from start to finish, a history of New Mexico license plates, and a stunning photography exhibit on Pie Town.  The two most interesting facts I learned that day?  That the state actually had to add USA to its license plate at one point because too many people in the rest of the US didn’t realize that New Mexico is actually part of the US.  Write this down as reason number 56,323 that travel is important.  And secondly, that nails were so valuable before mass production that some settlers would burn down their houses before moving so that they could take the nails with them.  After seeing the process of making just one nail, I have a much greater appreciation for the many modern conveniences that allow most Americans (ourselves and just about everyone we know included) to lead such luxurious lives.