Home » Travel » On the Road » Daytrippin’

For any of you counting, we’ve been in Colorado now for just over a month.  Much of that time we’ve spent with Alan’s family just south of Denver.  This has been an enormous help to us, as well as a lot of fun!  The first of couple weeks here gave us time to deal with our Eurovan, which we physically parted with on the side of the road in Memphis but didn’t legally part with until several weeks later.  We also used this time to figure out how we were going to travel going forward and re-equip, which mostly consisted of taking a very critical eye to everything we had previously been traveling with.  In our down time (meaning nap time for the little guy and in the evenings after he hits the hay) we’ve been reading travel books like crazy for the next part of our trip.  We had previously only researched in detail places we were planning to visit before arriving in Colorado.  Since we skipped a few states (that we hope to circle back to), we’re now faced with doing research for the next few states we plan to visit (Utah, Idaho, Montana, Washington, Oregon, California).

In addition to dealing with logistics, we’ve taken a couple of camping trips in our other (and now only) car to test out our pared down system.  But, for the most part, we’ve been enjoying time with family and friends and taking day-trips around the area.  We’ve been busy taking multiple trips to the mountains, exploring Denver museums and the zoo, poking around the Boulder Creek Festival in Alan’s former stomping grounds, frequenting the neighborhood pool, playgrounds, and trails that run right near our home, celebrating a milestone birthday with one of our dear friends (complete with belly dancer), and having (what has become a tradition during our visits to Colorado) a fabulous homemade Persian feast cooked by our birthday-celebrating friend’s wonderful parents.  I’ve also had the chance to catch up with old friends, one of whom I haven’t seen in at least twenty years, and spend much more time getting to know Alan’s wonderful family.  Watching Van interact with his grandparents and his Auntie Laura is definitely one of the highlights of our time in Colorado.  Van asks for each of them by name every morning.  He’s going to be in for a rude surprise when we can’t simply respond with assuring words that they’re right downstairs or that he’ll see them in a few days.

I guess he was tired of walking to the pool. He created his own in the backyard! 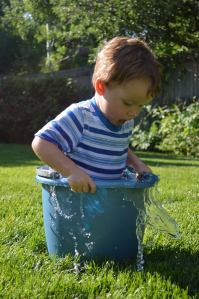 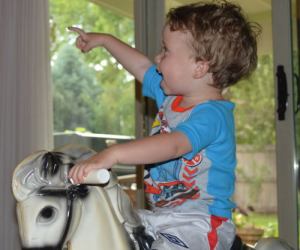 Van riding his horse that’s at least as old as his daddy!

In an Emergency Response Vehicle at the Boulder Creek Festival