Home » Travel » On the Road » A Warm Montana Welcome

We spent a little too much time running errands the morning we left Twin Falls, which left us with a long afternoon drive to get up to the part of Montana where we were intending to camp.  We enjoyed the empty space on our drive and the striking difference between the landscape in Idaho and southwestern Montana.  As the mountains began, so did our adventure in Montana.  While we intended on staying at a state park (and good thing we didn’t – it turned out to be closed), we spotted a few campsites along a reservoir on our way to find the state park.  We couldn’t find a place to pay, and realized that these were free sites.  It was just us and the wind on our spit of land overlooking the reservoir.  It was a much improved free spot to our first free camping night, in the snow, in a Wal-Mart parking lot.

After a disappointing morning drive to find out that Bannack State Park was closed, which I recently learned was due to flash flooding, we headed on to find another former gold mining town, Virginia City, and its kin, Nevada City.  We poked around the towns for a couple of hours, especially enjoying the strange taxidermy display of animals from the county we were visiting.  Each specimen was hunted by Mrs. Irene Martin or her husband in the mid-1900s and the taxidermy was all done by that same Mrs. Martin.  Not to worry, the examples of endangered animals that prowl the county were found dead and donated to her so she could work her magic and add them to her collection.  After having our fill of dead animal carcasses, we found a quiet spot near a creek to eat in some shade.  What is this thing called shade?  And grass and big leafy trees?  Oh how I’ve missed you!

Re-Created Interior of a Shop During the Gold Rush Days (I love these things!)

We headed back into this century and drove up to our next camping spot not too far from Livingston and Bozeman, Montana.  We began our visit with a jaunt to Livingston to escape the hailstorm that was scheduled to arrive momentarily directly over our campground.  This was one of the towns we were most excited to see on this trip and we were not disappointed.  It is fantastic!  We both independently noted the significant number of older men, most sporting plaid and trucker caps (unironically).  We liked the lived-in feel of the town.  Nothing was shiny, but it was all clearly well-loved.  And the museum (The Livingston Depot Center) was killer.  A seriously excellent free museum right in the heart of town, as old depots tend to be.  We had a great time over the next couple of days exploring the town, the nearby rivers (excellent for rock throwing), and one of the local eateries.  I also spied a man tooling down the main street in his car (he was the driver), while eating corn on the cob.  That’s a new one!

Livingston wasn’t the only excellent place we visited while in this part of the world.  Bozeman was my kind of town.  I was trying to think of adjectives to describe it, and vibrant just about captures it.  It was the first place on this trip that really just sang to me as a place to call home.  Can you tell that I loved it?  Once we realized that we really dug this place, we drove around a ton to check out the neighborhoods and some of the surrounding areas.  To make up for boring Van, we spent the good part of a day at the absolutely awesome Museum of the Rockies at Montana State University.  The museum has sections on dinosaurs (the museum has the largest collection of dinosaur remains in the country), space exploration, and regional/Montana history.  Each section is done remarkably well and appeals to both children and adults.  My favorite part was the turn-of-the-century house that was moved to the museum site and is now surrounded by dream flower and vegetable gardens.  Alan looked at me as I was walking around the garden, telling me that he knew I was soaking it all in, thinking about all of the plants that I could grow in this climate.  He was right, of course!  If only I could make a garden that looked even 10% as beautiful as that, I’d be happy.

Costumed interpreters at the house went through their daily chores and meals while visitors could watch.  At most living history exhibits that I’ve attended, costumed interpreters interact freely with the visitors, either acting as if they lived in the time and you came by for an explanation of what they’re up to, or while dressed in period costume, discussing the activities as a modern person would.  Because the interaction at this exhibit was minimal and visitors were left to observe the daily goings-on, I came away with a much stronger grasp of the ways in which ordinary tasks were carried out.  This was a great way to curate a living history exhibit that allowed visitors to focus on more than just how various crafts were conducted.

Sitting on the Front Steps at the Tinsley House

Our last stop at the museum was a children’s area that was expertly decked out to recreate many of the great elements of Yellowstone.  This area was complete with a tent (as if Van hasn’t seen one of those) and camping area, Old Faithful, a fishing stream, a lodge, and much more.  Van had a field day and was a tired little boy when we eventually dragged him from the museum.  Although this area had tons of costumes, Van only wanted to wear one, a park ranger.  A little boy after my own heart! 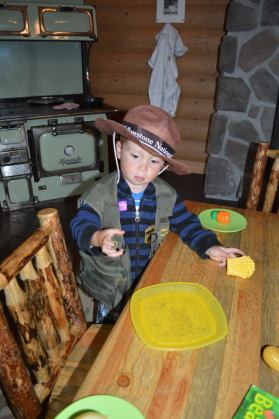 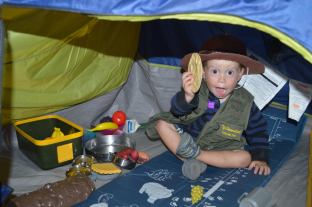 5 thoughts on “A Warm Montana Welcome”