I may have mentioned this before, but I have two fears that I’m trying to conquer, flying in planes and bears.  This is a bummer since I love to travel and to spend time outdoors, often in bear country.  I’ve come a long, long way since the beginning of this trip, frequently camping in black bear territory without a second thought.  Although I loved spending time hiking and camping in the past, it was seldom that my enjoyment wasn’t tempered with thoughts in the back of my mind about what large, furry creature might be around the corner or over the ridge.  I’m happy to say that I now have a healthy fear of black bears that all humans should have and no longer obsess over every breaking twig or food smells that may remain around camp.  Well, Alan would probably say I still obsess a little about food smells, but I think that’s healthy for both us and the bears.

Grizzlies, my friend, are another thing entirely.  When our Eurovan came to its tragic end in Memphis, and we decided to camp with only a tent to call home, we made the agreement that when in grizzly territory, we’d stay somewhere with four walls.  Not knowing when we’d be somewhere made this all the more difficult.  You see, we were in grizzly country during high tourist season, which only lasts a couple of months.  If I were a hotel owner in an area that only sees frequent tourists during one season out of the year, you better bet that prices would be significantly higher during that season.  Not only were prices insane, most places were already booked!  So, we opted for the least expensive option that would give us four walls and a roof and stayed in Motel 6s (or as Van says, Motel Number Six) in Missoula and then in Kalispell, outside of Glacier National Park.  I could spend all day telling you our thoughts of Kalispell, but instead I’ll turn to more positive topics – our visit to Glacier. 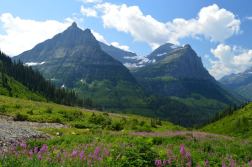 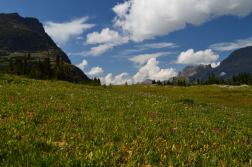 Glacier smelled amazing!  Seriously and phenomenally amazing.  It was beautiful, no doubt, but the smells took top honors.  While we enjoyed our time in the park, it was clear that to really appreciate the park, you need to spend more than a couple of days and you need to stay within the park.  We’ve already added this to our mental list of places to which we’d like to return when Van gets older.  While there, however, we enjoyed every minute.  The views were astounding, we ate lunch in incredible settings, Van continued his routine of rock throwing to great effect, we went on several stunning and rewarding hikes, and saw wildlife aplenty – including bears!  My proudest moment was when Van hiked the farthest he’d ever hiked without assistance, a full mile and three-quarters.  He spent most of the rest of the hike enjoying his perch on Alan’s back, but hopped out again for the last half mile of the hike.  And this wasn’t a flat path – it was a serious uphill hike with plenty of obstacles for him to maneuver.  My other proud moment was hiking without obsessing over bears, even though the first sign at every trailhead encouraged hikers to carry bear spray, and we did, in fact, see three bears. 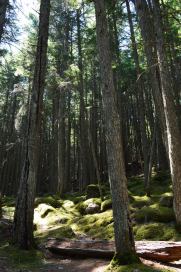 To set your mind at ease (or maybe just mine), we didn’t come across the bears while we were out hiking.  Instead, we came across gaggles of people along the side of the road with binoculars and large lenses.  Piquing our curiosity each time, we stopped and joined the fray.  On our first stop we were witness to a black bear (who was blonde – go figure) and a grizzly in different directions up a fairly steep hill.  Neither was close and I loved having the opportunity to watch them amble about.  On our second stop, we got out and quickly realized that we were only twenty-five yards from a grizzly.  Twenty-five yards!  Too close for comfort for both us and for the ranger.  We watched the bear for a few minutes before consciously realizing we were too close.  As we returned to the car, the ranger had the same idea and ordered everyone back in their cars immediately.  It’s not a good thing for bears to become habituated to people, and this sort of bear-watching at close range is just the sort of thing that can do that.

Are we bear watching or people watching?

If you’re contemplating a trip to Glacier and are interested in seeing glaciers, I recommend that you travel here sooner rather than later.  There are far fewer glaciers in the park than there were just over a decade ago when I first visited the park.  Although the signs of glaciers are everywhere, from the steep, glacier-carved mountains to the glacier-fed lakes, the glaciers themselves are becoming smaller and smaller each year.  Although the disappearance of glaciers in this park is all but inevitable in our lifetime, the landscape that owes its beauty to these icy beasts is well worth a trek to northern Montana. 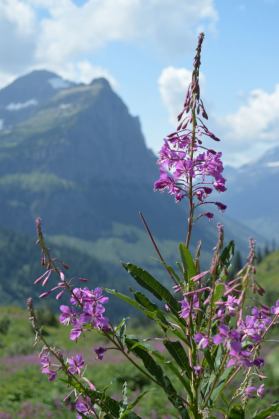 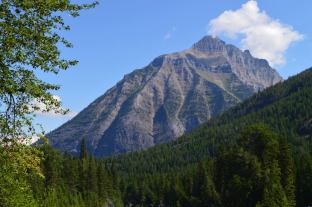