Home » Travel » On the Road » Where There’s Smoke…

What began as a short camping trip to explore the Great Sand Dunes National Park and nearby Alamosa, quickly turned into a lesson on the impacts of wildfire.  It goes without saying that wildfires have been a huge problem in the western United States yet again this year.  After last year’s disastrous fire in Colorado Springs, another, even more destructive fire broke out, known as the Black Forest Fire.  That fire, along with several others in the state, garnered a fair amount of attention on the local news.  With this in the back of our minds, we set out to drive southwest to one of our nation’s newer national parks, Great Sand Dunes National Park.  It is the home of the tallest dunes in North America and one of the strangest natural sites I’ve ever witnessed.  The dunes seem to arise mysteriously out of the valley against a backdrop of the Sangre de Cristo mountains.

Since we didn’t have reservations (we never do), we opted to head straight to the park campground and claim a spot.  After battling the wind to set up our tent, we decided to check out Alamosa that afternoon and then explore the sand dunes early in the morning when they wouldn’t have absorbed as much heat.  As we were heading down the long straight road that would take us toward Alamosa, we drove right by a bush that was on fire.  Just one bush, completely engulfed in flames.  Given its proximity to the road, we concluded that it was likely the result of a careless and inconsiderate driver who threw a cigarette out of the window.  Luckily we had cellphone reception and were able to speak with a 911 operator to let them know about the fire.  As we continued on down the road, we eventually saw a water truck and then a fire truck coming towards us, about fifteen minutes after we made the call.  They got there pretty quickly considering how far the burning bush was from a town.  When we drove back by the spot to reach our campsite later in the day, we were completely shocked at how large of an area had burned in the short time between the single burning bush that we saw and the arrival of the water truck and firefighters.  It just goes to show how quickly a wildfire can spread with the right weather conditions and plentiful fuel.

After our burning bush sighting, we had a relaxing afternoon in Alamosa playing on the playground and grabbing an early dinner at a local brew pub with, what seemed like, everyone else in town.  But, the whole time we were there, we kept eyeing the smoke coming over the mountains from the southwest, surprised with how imposing it was.  We didn’t realize that the largest wildfire in the state was burning right over the mountain range, the West Fork Complex Fire.  We would be much more acquainted with the fire as the evening progressed.  Just as the winds blew the sand over the San Luis Valley to a natural pocket in the Sangre de Cristo mountains to create the Sand Dunes, the winds blew the smoke from the West Fork Fire to the same pocket, right where we were camping.  Breathing in fairly thick smoke all night did not make for a relaxing night, but with no alternatives, we toughed it out and i thought of all the folks who have to breathe in this smoke on a regular basis. 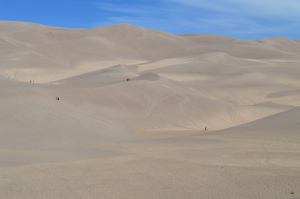 We had a great morning walking across the sand to begin climbing up the closest dunes.  Van and Alan loved running down the dunes and I gave sliding down on my butt a try.

Spying on Alan and Van down below

Playtime in the Sand Dunes

After we were tired and ready to head on, we drove east, puzzling at the smoke coming from the southeast, an area that was perfectly clear when we had driven through it yesterday.  Again, unbeknownst to us, a new wildfire had begun overnight, now known as the East Peak Fire.  We passed a number of TV crews setting up to get shots of the smoke coming over the Spanish Peaks as we passed through La Veta and felt like we were in a game of pin the tail on the donkey.  Blindfold us, spin us around, and whichever direction we walk in, there will be smoke.

Smoke coming over the Spanish Peaks from the East Peak fire

As of July 4th, over two weeks after we visited the Sand Dunes and a month after it began, the West Fork Complex Fire has burned over 110,000 acres and is only 20% contained.  Also as of July 4th, the East Peak Fire has burned over 13,500 acres and is 95% contained.  These are only two of the many wildfires that have raged (and continue to rage) in the west this summer.  Please keep the brave firefighters and local residents in your thoughts as they continue to live with the threats and discomfort of these destructive fires.

3 thoughts on “Where There’s Smoke…”