We spent a warm and sunny week in Arizona in early November, relishing the last days of wearing shorts and the last nights of sitting outside under the stars reading without shivering and diving into our sleeping bags as soon as the sun went down.  We spent the first couple of nights at a very nice (and very inexpensive) hotel in Phoenix while we ran errands.  We continued south to Tuscon, and spent the rest of our week camping in Tuscon Mountain Park just west of the city.

Our first night of camping was less than ideal.  I wouldn’t call it our worst night of camping (that was the night of the never-ending trains just south of Bellingham, Washington), but it was a close second.  The setting was picturesque, but our neighbors were less than ideal.  To one side of us was a couple that believed they could only communicate by shouting.  Their shouts continued into the night and were only drowned out by the deafening sounds of a concert celebrating the Day of the Dead.  It seemed like we were off in the wilderness when we set up camp.  We weren’t.  Though it was out of sight, our tent was not too far from an old-west theme park, complete with live (and loud) entertainment.  When the music finally stopped a couple of hours past midnight, we thought we could finally catch a few zzzzs before daybreak.  Hahaha!  Shortly after the music stopped, our tent was illuminated by headlights from the cars of concert-goers as they parked, partied, and then crashed for the night in the site on the other side of us.  Alan awoke to one man asleep on the ground, whiskey bottle to one side, Budweiser cans on the other side.  Watching them awake one-by-one made me so happy that it has been a very long while since I’ve drunk enough to earn a morning hangover.

The second, third, and fourth nights were better, but no less interesting.  Once all of our neighbors cleared out, new ones moved in.  Replacing the drunk and passed out concertgoers was an older man and his dog.  They had no car, no bike, and did not appear to have a backpack.  They never left the site for the three remaining days we were there, and we’re still not sure how they arrived.  There was a bit of muttering and full-on conversations with the dog, but things got interesting at the first sounds of the coyotes.  One coyote started, then a second, a sixth, and a twenty-sixth.  And then the older man joined in, howling right along with the coyotes for a few minutes until they all quieted down.  Alan and I looked at each other, whispering that we were in for a long night.  Though our human neighbors changed, one thing that did not change was the very regular sounds of coyotes near (sometimes very near) and far.  Luckily for us, our neighbor did not choose to join in every chorus of the canines.  Phew!  Sleep was much better during the rest of our stay.

When we weren’t listening to neighbors, concerts, or coyotes, we were out enjoying the desert and the tree-like cacti that dotted the landscape.  We went to both the western and eastern sections of Saguaro National Park (pronounced Sawaro) and both prefered the landscapes and the hiking trails of the western half of the park.  The eastern portion is more easily accessible from the city, which also means that large portions of it have wide views of the urban area.  The western portion is set further off from the city and gives you the feel of being in a more isolated locale.  Regardless, the cacti, and particularly the Saguaro, were fascinating. 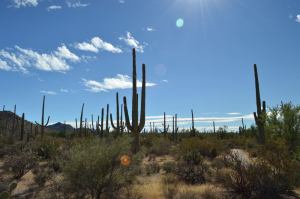 I always thought of cacti as something apart from other plants, but as I get to know cacti better during this trip, I begin to see the many similarities.  Saguaros are very much like a tree, from their height and girth to their woody stems.  The decaying Saguaro allowed us to see the similarities most closely. 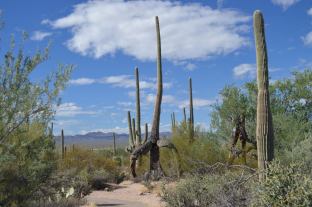 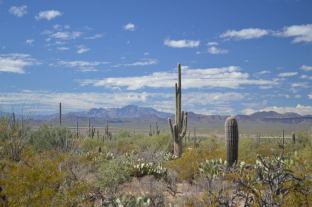 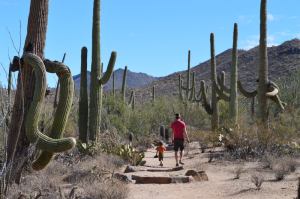 In between our forays into the desert, we spent a morning at the International Wildlife Museum, run by Safari Club International.  As one might expect, there were many taxidermied animals – big game and small game – as well as a stunning collection of butterflies, moths, beetles, and other insects.  The exhibits were very well done and, except for a cavernous trophy room (which was interesting and educational in its own right), were focused on wildlife conservation.  They even had a display on famous hunter/conservationists, including none other than Aldo Leopold, and a quote from an author and individual I greatly admire, Wendell Berry.

Though we spent most of our time in the Tuscon area exploring its natural wonders, we did make time for a few man-made wonders.  The highlight was our visit to Mission San Xavier del Back, which was constructed in the late 1700s.  It’s hard to overstate the magnificence of the bright white walls against the deep, blue, afternoon sky.

But most of all, our week in Arizona will bring back memories of late night howls and the tree like cacti recoiling from any attempt at an embrace. 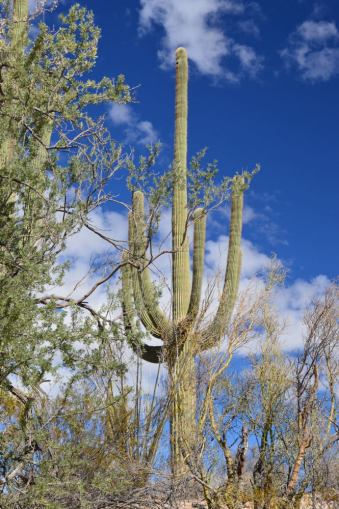