The only thing that made me excited to leave Rocky Mountain National Park was our plans to visit our friends in the Breckenridge area (Silverthorne to be exact).  We had seen Rebekah and her son Rhyer this past Thanksgiving, but before that she and I had not seen each other since college!  Even though it had been so long since we’d spent any meaningful time together, within minutes it felt as if no time had passed.  Those are the best kinds of friendships!  Van had a blast playing with Rhyer.  He basically became a parrot, mimicking everything that Rhyer (who is a couple of years older) would do.  This was a huge benefit when it came to eating.  Van was keen to skip breakfast so that he could get extra time with the toys, but after seeing Rhyer eating a nectarine, it took no convincing to get Van to follow suit.  Healthy eating for the win!

On our first afternoon with Rebekah, we headed up to the nearby town of Leadville, which just so happens to be the highest incorporated town in the country.  As we were wandering around town and checking out her old stomping grounds, she thought it’d be a treat for Van to see the fire station.  Since she knows several of the local firefighters, we were able to take Van on a grand tour of all of the fire and rescue trucks.  And these are no ordinary fire trucks.  These firefighters cover a huge, mountainous area and face building as well as forest fires.   Their trucks were massive!  We finished the day feeding fish at the fish hatchery, grabbing a great dinner in Leadville, and staying up late and chatting over glasses of wine.  A perfect day!

The next morning, Rebekah and Rhyer took us to Cataract Lake, a fantastic hiking spot in the Eagles Nest Wilderness Area.  It was a perfect hike for kids – not too difficult but not too easy.  Van wound up walking about half of it and being carried the rest of the way on Alan’s back.  The hike was around a lake and to an impressive waterfall with a small wooden bridge over the rushing water.  The views were insane (no filters or adjustments of the photos below – it was that beautiful), but the coolest part was how the trail passed through several different types of environments.  The number of changes in scenery, plant life, smells, and colors were pretty remarkable for a trail less than three miles long.  This would be the kind of trail you could keep coming back to during different seasons and not get bored. 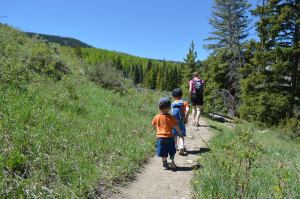 Hiking with Rhyer and Rebekah

After an afternoon and evening of more fun, great food, and even better conversation, we woke up and struck out for Breckenridge.  We spent the morning wandering around, eating crepes, and stocking up on food for the next few days before saying our goodbyes.  THANK YOU FOR EVERYTHING REBEKAH AND RHYER!!!

We continued westward, headed for Colorado National Monument.  We decided to overshoot the park and first check out Rabbit Valley, a beautiful and completely deserted area along the Utah border.  We could have camped there for free, but we decided to opt for a campground with water where we wouldn’t be so far away from anyone else.  We made our way to Colorado National Monument and set up camp for the next couple of days in a beautiful spot up on a cliff overlooking the town of Fruita.

Rabbit Valley, near the Colorado/Utah border

Now that we are out of the mountains and into the semi-desert, the weather has changed dramatically.  The sun had us up and out of the tent by 6am and on the hiking trails by 7.  We were able to get some beautiful hikes in each day before it got too hot, and then proceeded to do some exploration by car in the middle of the day with stops for water play and ice cream in Grand Junction and a shaded picnic in Palisade.  Across the valley from CNM were the Book Cliffs, so named because the edges of the buttes appear similar to a shelf of books.   Though they lacked the punch of the rock formations in Colorado National Monument, I found them strange, beautiful, and all the more compelling. 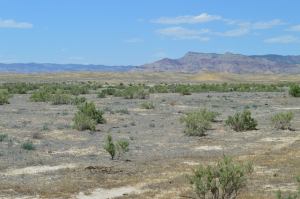 We capped off our trip with an afternoon wandering around and picnicking in Glenwood Springs on our way back to the Denver area.  We also swung through Carbondale during Van’s nap and vowed to come back and check it out again when we’d have time to explore.  I was instantly taken by how it was situated, between towering mountains still covered in snow in one direction and red rock cliffs in another.  Those are views I could get used to!

One thought on “From the Mountains to the Semi-Desert”