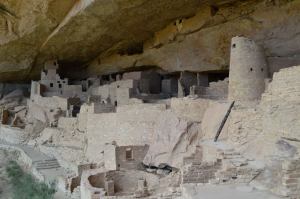 Ever since I was a young adult, I’ve wanted to visit ancient cliff dwellings in the southwest.  I’ve seen pictures over the years, but I wanted to walk in and amongst the dwellings and to understand the scale of these homes perched high above the ground.  Because we temporarily skipped visiting New Mexico due to the unforeseen demise of our not-so-trusty traveling companion, our first opportunity to visit these dwellings was at Mesa Verde National Park in southwestern Colorado.  We decided to spring for two nights in their lodge, which turned out to be a great idea given the intense thunderstorms that struck in the evenings during our stay.

In order to visit several of the more popular dwellings, visitors need to attend a ranger-guided tour and must descend, and later ascend, several ladders.  Since none of this sounded appealing with a two-year old, we took him to the more accessible dwellings and took turns taking a tour of Cliff Palace so we could each get up close and personal without worrying about our toddler underfoot.  We weren’t sure how much there would be for Van to see, but there turned out to be so many places for him to explore with us that we shouldn’t have ever been concerned.  And since it seems that most visitors stick to the guided tours, we had much of the park to ourselves.  We visited at least ten sites with Van, and probably saw fewer than ten other visitors at all of those sites, combined.  It was only when we went to see Cliff Palace that we were reminded that we were not lone travelers who just happened upon these sites during our wanderings. 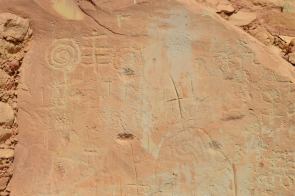 The dwellings, built by the Ancestral Puebloans in the 1100s and 1200s, are built into cliff alcoves.  The cliffs above serve as protection from the elements and the cliffs below serve as a foundation for their homes.  These dwellings are essentially hanging on to the side of cliffs that are almost vertical.  And this pre-dates baby-gates!  The strength and ingenuity of the individuals that built these structures and called them home becomes even more impressive when you spend time climbing down to and walking around the structures.

While the cliff dwellings get all the fanfare, there are over 4,000 archaeological sites in the park, many of which are mesa top sites.  Because these sites are less well-known, these were the sites we were able to enjoy in peace and quiet, giving us time to absorb the atmosphere and try to imagine a people much more skilled than ourselves living and working amongst the harsh elements with only sporadic access to everyday needs.

All in all, almost every aspect of our visit was fantastic – from the peacefulness, to the history lessons and unparalleled views.  The only down note was the Navajo Tacos, which were both expensive and terrible.  I love Navajo Tacos.  Anytime I have the chance to order one, which isn’t nearly often enough, I do.  These were probably the worst I’ve ever had, but I had to try – especially since we had a $50 gift card burning a hole in our pocket that was only usable at the Mesa Verde concessions (we received it when booking two nights in the lodge).  We were much happier eating dinner the second night at the swanky (but no dress-code, thank goodness!) Metate Room.

We were originally planning to spend a third night in the park at their campground, but severe thunderstorms rolled in during the afternoon of our third day in the park, and we decided to ditch our idea of relaxing in the campground and doing laundry, and booked it all the way up to Canyonlands National Park in Utah, thus ending our two month stint in Colorado.

The Storm on the Horizon